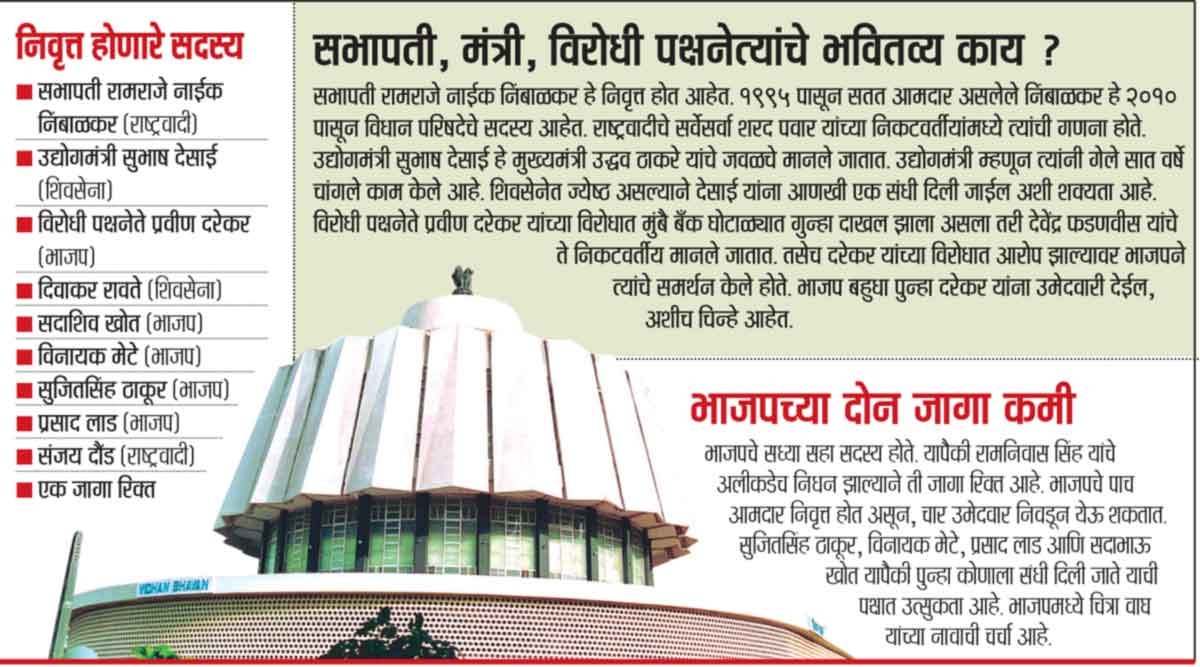 Mumbai: Like the sixth seat in the Rajya Sabha, it will be contested for the 10th seat in the Legislative Council. Depending on the strength of the assembly, four candidates from BJP, two from Shiv Sena and NCP and one from Congress can be elected on the basis of first preference votes. Churshi is expected to fight for tenth position. Congress must obtain at least 12 votes for the 10th seat.

As elections will be held for ten seats in the Legislative Council, 27 first preference votes will be required to be elected. The vote for the Legislative Council is likely to be split due to the secret ballot. Previously, there was a split in the state assembly elections. In it, a candidate from the then ruling Congress Party was defeated. This will make all political parties more cautious. Although there is a quota of 27 votes, one or two more votes must be arranged.

According to the strength of the Assembly, four BJP candidates can be elected. BJP has 106 MLAs and some independents support it. As a result, there will be no problem getting four BJP candidates elected in the first round. Shiv Sena has 55 MLA. Shiv Sena has enough votes to elect two candidates. Although the NCP has 53 MLAs, some independents are with the NCP. As a result, two NCP MLAs can be chosen in the first round. A candidate for Congress can be easily elected. After giving the first candidate a quota of votes, Congress has an additional 15 votes. For the tenth candidate to be elected, Congress must obtain 10 to 12 votes. For this, a financially strong candidate will have to enter the fray.

With the support of smaller, independent parties, another candidate for Congress can be elected. The whole picture could change if a financially solid candidate enters the fight for 10th place.

The possibility of such a game being played by the BJP cannot be ruled out. If the MLAs of the small and independent parties are submitted, the big candidates can be defeated.

Spokesman, Minister, What is the future of the leader of the opposition? ?

Speaker Ramraje Naik Nimbalkar withdrew. Nimbalkar, who has been an MLA since 1995, has been a member of the Legislative Council since 2010. He was considered as one of Sharad Pawar’s close associates. Industry Minister Subhash Desai is considered close to Chief Minister Uddhav Thackeray. He has done a good job for the last seven years as Minister of Industry. As a senior at Shiv Sena, Desai is likely to be given another chance. Although a case has been registered against opposition leader Praveen Darekar in the Bank of Mumbai scam, he is considered close to Devendra Fadnavis. Also, when accusations were made against Darekar, BJP supported him. There are signs that BJP is likely to reintroduce Darekar.

The BJP currently has six members. The position is vacant due to the recent death of Ramniwas Singh. Five BJP MLAs are withdrawing and four candidates are likely to be elected. The party is curious as to which of Sujitsinh Thakur, Vinayak Mete, Prasad Lad and Sadabhau Khot will get another chance. The BJP is discussing the name of Chitra Wagh.

Young man from Delhi disappears in the dense forest of Lonavla;